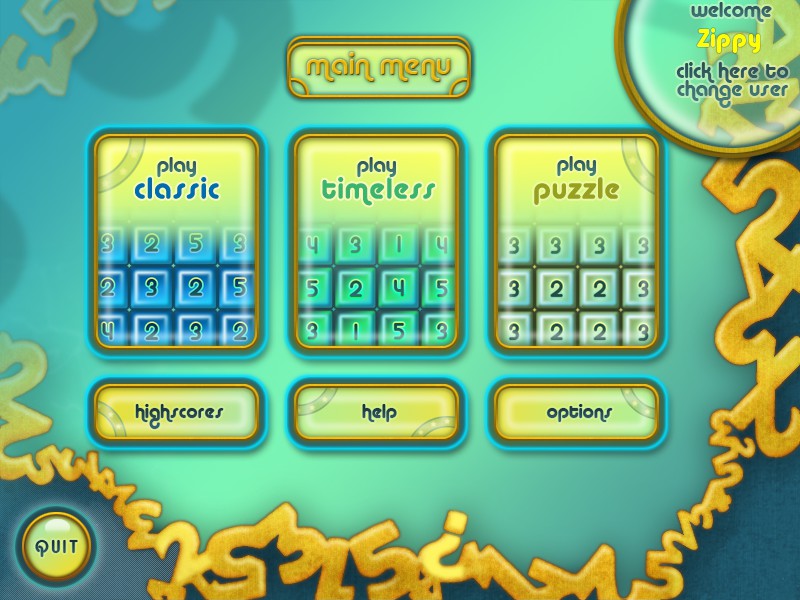 My goal is to review everything I play from here on out because it builds my writing skills and allows me to have this back catalog of my gaming opinions for the future.  This does mean that I sometimes have to review some odd games that I started playing purely to finish off another game in my Steam library.  With that said, here’s my review of Numba Deluxe!

As a disclaimer:  normally, my reviews involve breaking the game down into smaller chunks, like story and gameplay, and reviewing these aspects separately.  Since this game is a mobile port of a simple puzzle game, however, there really isn’t much to break down and my review will reflect that in its brevity.

Numba Deluxe gives the player a board of numbers and the end goal is to match those numbers up as quickly as possible.  There are two ways to match numbers, with one being the obvious one where the player just finds a bunch of the same number on the grid and draws a line.  The second type of matching is to create a sequential list, such as finding numbers that increase by one or two in a row.  The goal is simple, which does allow for some relaxing mind-numbing while watching Netflix, but even with the addition of blocks that burn up or freeze after a certain amount of turns, there isn’t anything very engaging here.

Numba Deluxe does function, but that’s really all it strives for here.  The resolution is shockingly low for a game from 2013, and the graphics, while serviceable, have some contrast issues that gave me a headache.  Take, for example, the following screenshot:

All of these tiles are on “fire”, and the fire effect just blurs and conceals the numbers.  While all of the numbers are still visible, the blur effect makes it a bit harder to read and causes a generally unpleasant experience.

I mentioned before that this is the kind of game that might be played while watching Netflix, but as a Netflix-and-game expert, this game still falls short because of its speed.  Numba Deluxe is a game that should match the same fast and frenetic action that games like Bejeweled have managed to achieve, but it doesn’t.  I found myself frequently waiting and tapping my fingers impatiently for the ability to make another move.  Add to this a jarringly high-pitched ringing noise that occurs every time a player makes a match, and this all adds up to a game where playing it feels more punishing than fun.

Numba Deluxe is a mobile port, and it shows.  While I didn’t enjoy my time with the game at all, there’s nothing functionally wrong with it, so fans of puzzle games may still want to check it out if they have already played every other game on the market.  If someone really wants to pick it up, I would highly advise to just play it on mobile, where it is clearly meant to be.

If you like this review, check out the others that I’ve written.  Let me know in the comments if you’ll be picking this one up, or if you’ve played the game before!